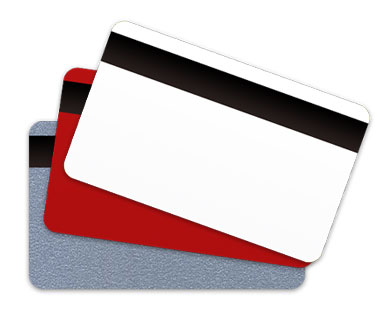 The world of magnetic stripes (also referred to as magnetic strips) can be a bit overwhelming at first but once you understand the basics, it becomes much easier to decide which options will work best for your needs.

The first question to ask yourself is this. Is your magnetic stripe just for show, or does it actually need to function? If it is just for looks, any magnetic stripe option will work just fine.

If you plan to use it as a gift card, security access card, membership card, casino player’s club card, or any other functioning, swipeable PVC card, you will need to select the proper type of magnetic stripe and encode it with data.

How do Magnetic Stripes Work?

When a magnetic stripe is added to a plastic card, it gives it the ability to store data. In technical terms, magnetic stripes work with the use of ferromagnetic particles that are encoded with data based on polarity. An encoding device will create a pattern of both positively and negatively charged particles, as directed by a computer, which controls the pattern of charged particles on the stripe.

In plain English, mag stripes can be “encoded” with a string of numbers or data. When swiped by a point-of-sale (POS) system, security system, or other type of swipeable device, a value can be assigned to that data.

For example, you can encode a blank gift card with the number 1001. You can then swipe that card through your POS system and assign a value of $50 to the gift card numbered 1001. Each time that plastic card is swiped, you can deduct from that $50 value through your POS.

Another example would be to encode a blank plastic card to be used as a security access card. Using security software, you could encode the card to grant access to select individuals when their card is swiped using a card reader at a secured entrance.

Now that you know you need a functioning magnetic stripe, there are a few options to choose from. The first decision is Low Coercivity (LoCo) vs High Coercivity (HiCo).

A LoCo magnetic stripe is the less expensive option and popular for plastic cards that do not contain highly secure data on them or get swiped often.

A HiCo magnetic stripe offers greater durability for cards that are swiped frequently, and are better suited for high security functions.

This should be enough to help you determine which type of magnetic stripe works best for your needs, but here is some more information illustrating the characteristics of both options.

The Oersted density, more often referred to as Oe, is a unit of resistance to the magnetic charge. The Oe density can range anywhere from 300 to 2750. The number represents the force it takes for another magnetic field to wipe the data encoded on the stripe to zero magnetism, so 2750 Oe is much harder to erase than a 300 Oe. 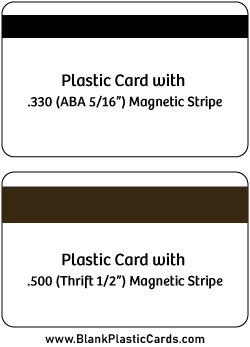 Another decision to make when selecting your blank PVC cards is the height of the magnetic stripe. You can choose from either .330 or .500.

.330 refers to the height, in inches, of the magnetic stripe which is available in both LoCo and HiCo swipe cards. .330 thickness can also be referred to as ABA 5/16”. This thinner magnetic stripe allows for more space on the backside of the card for your design or text.

.500 refers to the height of the magnetic stripe which is available in both LoCo and HiCo cards. .500 thickness can also be referred to as Thrift 1/2” and is the most popular mag stripe height.

Think of the magnetic stripe on your plastic cards as a mini VHS or cassette tape (if you are old enough to know what those are). They have the ability to record information. This information / data can be applied or “encoded” onto track 1, 2, and/or 3. Depending on your POS system or the device you will be swiping your cards through, there may be certain encoding requirements to make the plastic cards compatible with your software. This could include a certain track, number of characters, starting number, etc..

Data can either be encoded as sequential or variable. An example of sequential numbering would mean one card could be numbered 1001, the next would be 1002, the following would be 1003, and so on. Variable data means that each card would contain a unique or random number sequence. Typically a .csv data file would be used to encode plastic cards with variable data.

What is a Track?

Each plastic card with a magnetic stripe, whether it is LoCo or HiCo, contains three tracks - 1, 2, and 3. Think of each track as a unique line of text, but for data. Each track has different capabilities:

Many applications for plastic cards require two tracks of data to be used, however your Point-of-Sale (POS) provider or encoding software solution will be able to give you the encoding requirements needed to make the magnetic stripes compatible with your card reader.

Selecting the correct magnetic stripe options is not as complicated as it may seem.

BlankPlasticCards.com offers several magnetic stripe options with the most popular being:

To completely decode the magnetic stripe options available on www.blankplasticcards.com :

BlankPlasticCards.com is one of the largest manufacturers of blank PVC cards and proudly produces its cards in the USA.

In addition to incredibly low prices, it offers the largest select of blank plastic cards including a wide range of colors and magnetic stripe options.